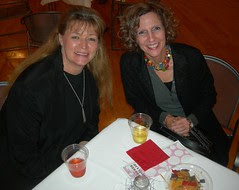 Neecee Blackwell, Linda Snyder Gaston
Originally uploaded by trudeau.
Didn't think I'd see a second coming of body painting, but how provincial. Here's evidence otherwise. Lynda Snyder Gaston says, "My friend, Neecee Blackwell, and I are planning to attend the International Face and Body Art Convention in Orlando this month. I thought you might get a kick out of knowing that one (or two) of your former students will be attending as models. Caleb Gaston and Cazes Verbois will be traveling with me. Check out faceandbodyart.net. Hopefully, later in the year you will be able to see some photos of Caleb and Cazes there."

Indeed: handsome lads, both. Good dancers, too. And Neecee and Lynda are gonzo painters. Wonder whether stylistically they'll be heading toward Laugh In or leaping into the Burning Man slash rave world.

"Today there is a constant debate about the legitimacy of body painting as an art form," says Wikipedia.org. And well there should be.

Wikipedia points out a modern milestone: "The current modern revival could be said to date back to the 1933 World's Fair in Chicago where Max Factor and his model were arrested for causing a public disturbance when he bodypainted her with his new make-up formulated for Hollywood films."

For sure, body paint is one of the classic non-Western art forms. Witness the tribalsts, the mehndists. Then there's KISS (you actually like that group, don't you?) and the Insane Clown Posse. Not to mention the British body paint-oriented World Naked Bike Ride, something that I'm sure I should mention as we try to hype our National Bike-to-Work month.
Posted by Robert E Trudeau at 7:39 PM