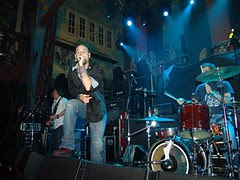 Squint opening for Slayer at House of Blues, New Orleans

"Squint will be performing Saturday at Sully's Tavern with special guests, Shreveport's own Mars Vegas," says Brett Roman Stampley. "We are thrilled about this show as it promises to win 'show of the year' honors by people who keep tabs on this sort of thing.

We also ask that you support this event to display your enthusiasm to local bar merchants for quality and original rock acts that don't suck."

"The show starts at 10pm sharp. Admission is only $5 and there will be alcohol served till 6 am. There can be no drinking between the hours of 6am to 7am; if you break this Blue Law then you will be forced to say 12 Hail Marys and 2 Our Fathers at the next Shreveport City Council meeting."

The Squint story is a tight one: musicians from small-town Michigan relocate to the metropolis of Ruston, Louisiana, to get their career rolling.

They're such a good riffin' band with a smart vocalist - Dane Adrian - that they've become a success, location be damned.

Chris Smith of Houston Press says of their album,"Squint's music is chock-full of sticky pop hooks, with lyrics both general enough for mass appeal and clever enough to set the band apart."

Casey Jones said on ShreveSpoon this week: "Squint is always a great show. I'll be there. Friday night, Trip Rocket is playing at Sullys; check them out also."

And if you scroll back on this blog you'll see my enthusiastic review of Mars Vegas new album.
Posted by Robert E Trudeau at 6:28 PM