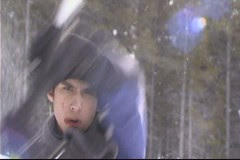 Hunter Carter and filmmaking partner Evan Falbaum are award-winning teen artists. They won the Louisiana Film Center student division award in 2004 with their droll "Hey, God." That piece will be shown at the La Film Center gala, to be held Fri., Ap 29.

Carter and cohorts will produce the Mosaic Film Festival at Caddo Magnet High School at 7 pm Wednesday, April 28, showing their new short films in the course of presenting numerous new works by other CMHS students.

See the Carter-Falbaum work at the web site they founded and operate, 2Manshows.com.

More on the LFC event from Sylvia Goodman, director:

The Louisiana Film Center will hold its first annual fund-rasing gala Film Fantasy Fandango on Friday, April 29 at Fox Creek Farms from 7-11 p.m.  Come and mingle with fantasy movie stars.  Enjoy a sumptous cocktail buffet by Bella Fresca and dance to recording artists The Terms (formerly the Sidewalks). Clyde Hargrove and the Terms have signed a recording contract with a major label.  Tickets $100. Call the Louisiana Film Center office at 424-9090.
Posted by Robert E Trudeau at 5:29 AM

ltlrat said...
This comment has been removed by a blog administrator.
26 March, 2005

My current piece "Shakespeare: Back in Action" (starring Dylan Nix, Evan Falbaum, Hunter Carter, Cyndil Smith, Kemerton Hargrove, Danny Lachman, Shane Irvin, Andrew Crawford, and Cobly Smith) will probably also be showing on one of the nights of the film retrospective (that tuesday or wednesday). I should be finishing it up in the next few days. Definitly by the end of the break...It'll probably run close to 20 min., and I'm really impressed with how it's turning out. It's my first completely solo short film (as in first story-driven short without Hunter writing or directing), making it my Writing/Directing debut.

im working on "1692" ok so thats no t the name..we havent decided one yet..but its not going to be done in time for the festival T~T

I have been working with Hunter pretty closely on a project being called "(Love or Something) Sparks So Quickly". This is a hard film to categorize into a genre but you will soon be able to see it at the 2MS website (http://www.2manshows.com).

Chris Lyon said...
This comment has been removed by a blog administrator.
03 April, 2005

Chris Lyon said...
This comment has been removed by a blog administrator.
03 April, 2005

Chris! Thanks for the update. Evan, merci beaucoup for your post. Mitsu, sorry I don't know your handle. Please email me with an update.