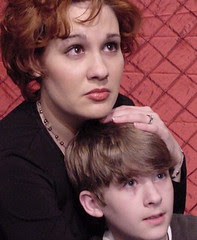 Richard III, Shakespeare's classic tale of politics, intrigue and murder, will be performed at the East Bank Theatre March 10 through March 20.

Folmer, King, Joris and Poppell are among my favorite actors in the city. Folmer and King by themselves could entertain us, could have us rolling on the floor laughing our derrieres off - by reading the instructon booklet to your new camera.

This production of Richard III, directed by the gorgeous and deeply-trained Shakespearean actress Heather Peak, has been fortified by a long list of names of local players whose names are synonymous with hard work and competency. Thus there is no stretch involved in recommending this production to you at the highest level.