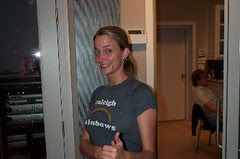 SXSW: Zykos' Cat
Originally uploaded by trudeau.
"Now in its 18th year, the South by Southwest festival in Austin, Texas, is a veritable fantasyland for music fans. There's a nearly 24-hour-a-day onslaught of live music showcases, parties and panels, as well as a whiplash-inducing propensity to run into other journalists, publicists and long-lost friends, said Billboard Magazine.

According to Wired.com, you can download some 750 mp3 tunes posted - via bit torrent - by the gigatrip of bands participating.