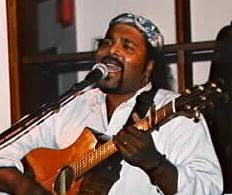 Tom Prasada-Rao burst on the scene in 1992 and has not let up since, says the Fredericksburg Songwriter's Showcase web site. Over the last five years, he has played close to 150 dates a year "wowing audiences with his gentle stage presence and explosive musical ability" (Lydia Hutchinson, Performing, Songwriter)

Tom was born in Ethiopia of Indian parents, and educated in England, the US, and India, and his music reflects that diversity--blending pop melodies with R&B rhythms and finely crafted lyrics into his acoustic guitar, 3rd World instrumentation, and his voice - "like cream of angel soup".

Both Sandra Odom and Greg Williams say that Tom is the tops. Audition songs from his album "Hear you laughing" at Amazon. And read why I enjoyed a recent Fairfield Studios concert.