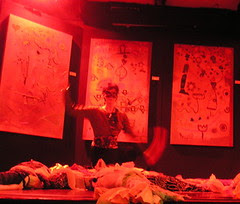 Choreographer Kristi Dorothinia Hanna has been working on Intoxication for several months. "It all began in Hawaii," she explained, "when Sondra Fraleigh was talking about Soma and what it means, which is the entire body of an organism - as well as an ancient drink of the Hindu gods - and it has evolved steadily since then ..."

A Visual Sound and Movement Company will present a Dance Concert with Sondra Fraleigh as featured performer, in a collaboration entitled Intoxication.

Fraleigh (see post below) is an internationally known dance educator, author, and researcher.  She has studied Butoh extensively as well as written a book on the topic.  This will be a unique opportunity to see Sondra in a Butoh-inspired performance, says Arodasi director Hanna.

Contact Peggy LaCour at 518-6282 or Pldragondance@aol.com for tickets ($10).  Arodasi is an intimate art space with limited seating; reservations are recommended, says LaCour.

Friday, March 18, 7 pm: Sondra Fraleigh will read poetry and excerpts from her book Dancing Identity: Metaphysics in Motion. Following the reading, workshop students will perform a dance developed this week. $10
Posted by Robert E Trudeau at 4:51 AM

Why am I thinking of 'Brave New World'?

Because of the term soma and because you are well read and sensitive to nuance.

Thanks for responding, Chuck.