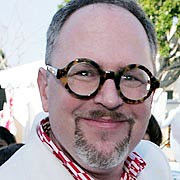 Fasten your seatbolts, Shreveport! The Art of Robots Exhibition at artspace at the west edge will rivet the attention of audiences beginning the weekend of March 18, 19 and 20, featuring original artworks, designs and concepts related to the new animated movie, Robots, produced by Shreveport's-own William Joyce.

William Joyce has authored 16 books including Santa Calls, George Shrinks, The Leaf Men and the Brave Good Bugs and others. He currently boasts two successful television series -- on PBS George Shrinks and on Disney Channel, the Emmy award winning, Rolie Polie Olie. He's been named by Newsweek as one of 100 "People to Watch" in the New Millennium and by Entertainment Weekly as one of the "100 Most Creative People." William Joyce is a Founder and Creative Director for artspace as well as designer of The Art of Robots Exhibition.

Artspace at the west edge is a partnership between Shreveport Regional Arts Council and the Downtown Development Authority. Artspace has been closed for renovations since striking the popular Peter Pan Centennial Celebration Exhibition in December, but this re-opening, in addition to the brand new Art of Robots exhibition, will showcase even more improvements to the building, the former Ivan Smith Furniture, at 710 Texas St. You might say the building has been repaired for adventure, just as audiences should now be.

Despite the huge amount of Hollywood star-power, perhaps the biggest star of Joyce's new animated feature and of this exhibit is design. Things that have long been considered junk were given a second lease on life as models for the movie and this exhibition. Chris Wedge, Director of the movie, Robots, says that Rodney Copperbottom, the film's hero, was fashioned from an Evinrude boat motor from the 1940s or 50s and elements of a VW Van.

In the artspace exhibit, you'll see that same sort of adaptive recycling. Recognizable items will catch your eye at every turn, especially in the Joyce-designed Rivet Town and Robot City, one of the many exhibits on hand for this show.


Stay tuned to this space for more info on the divers activities yet to flex.
Posted by Robert E Trudeau at 4:12 PM