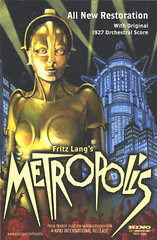 ARTSPACE at the WEST EDGE will kick off its Science Fiction Double Feature Series on Friday, March 25 at 7:00 p.m. The series will consist of two sci-fi movies -- one a classic, the other a more modern movie, says SRAC. Hosts for the evenings will give a brief history of the movies and share their perspectives on why the two segue. This event is part of the Art of Robots Exhibit, featuring the artwork and concepts behind the movie ROBOTS designed by William Joyce, at ARTSPACE, 710 Texas Street.


Host for the first Science Fiction Double Feature is Chris Jay. Chris is a filmmaker, writer and musician based in Shreveport, LA.  He has produced several short films spanning a variety of genres, including The Dog Thief and A.R.S.E. (narrative) and Generation Gap (experimental), as well as various small documentary projects. Interests that inform his work are politics, socio-economics, the Southern identity, and emerging forms of urban music.


Chris will be presenting the classic movie, Metropolis, directed by Fritz Lang in 1927, and pairing it with Blade Runner, the 1982 Ridley Scott film.

For more information on Science Fiction Double Feature or the Art of Robots Exhibit, please call Artspace at 673-6535.
Posted by Robert E Trudeau at 4:52 AM

Something like 50 people showed up to enjoy popcorn and discussions about movies. Wow.
Artspace was comfortable for the viewers and accessible, at the same time, to people making general explorations of the new facility.