Review: Holiday season performances opened by the colorful and warm Amahl and the Night Visitors as presented by Shreveport Opera 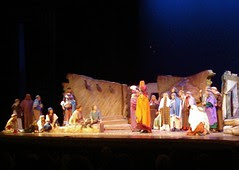 Shreveport Opera's presentation of the now-classic piece - it was written for television broadcast in 1951 - was suffused with warmth, melody and a holiday vibe.

Amahl, an operatic fantasy, does not put an emphasis on Bethlehem as location. But an imaginative staging might have brought more Arabic awareness to the show (in dance, in costume detail, body language, etc.). Shreveport has a growing population of people of Asian background (the Middle East is, indeed, SW Asia). The community looks to its artistic leaders to better the appreciation for the cultural gifts that come with new populations.

Carols sung by Centenary Camerata opened the evening. While the choir was large and well-rehearsed, there was little sense of drama to their singing. Singing several pieces a capella and adding a flute to one number were lovely moments. But those moments were muffled by the lack of turns by soloists or other embellishments. Camerata seemed competent and bland.

That was not true of the quartet that opened for Camerata. The Shreveport Opera Express, a group that specializes in seducing the young via piano and voice, was vaudevillian.

As usual, we saw few people with children at the opera. Regrets. Amahl was a terrific opportunity for families.

In fact, if there had been a special performance for children and parents or grandparents, the entire city would have been enriched. The Shreveport Opera Chorus, some 21 strong, made a joyous noise that contrasted well with the solo voices. The 20-member orchestra, directed by Marc-Andre Bougie, was like hot chocolate. The dance numbers were performed by young dancers.

With the collapse of the Shreveport Symphony Orchestra the Shreveport region has learned what its like to live without a center for fine arts music. Particularly for the educated class, there's a void in the city.

Wouldn't it be healthy if some of the region's wealthy families decided to dig deeper and make a larger financial commitment to the opera and orchestra? It would enable special performances such as the family performance I described above.

Basically, Shreveport remains stuck in a vacuole. There's no clear voice that calls for excellence in the arts. Or for a higher commitment to excellence in urban life. Such a waste.
Posted by Robert E Trudeau at 11:05 AM