Review / Me and Orson Welles @ RFC: Clare Danes and Christian McKay vibrant in a flic all about theater 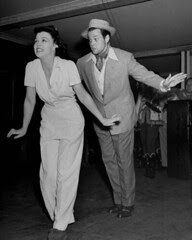 Suzanne Ridgeway y Orson Welles
Originally uploaded by Lord_Henry
The filmmaker Orson Welles (Citizen Kane, etc) roars to life in the Mercury Theater in Manhattan, 1938, in the movie Me and Orson Welles.

The 114-minute film is playing at Robinson Film Center, Shreveport.

Welles was about a year away from producing his radio shocker, War of the Worlds. He was about 2 years away from making movies but that was not apparent. His ability to live large pre-dated his arrival in Hollywood.

Me and Orson Welles is largely about theater and why it is so addicting. It's also about this charmingly bombastic historic figure and about Manhattan in the 1930's.

Christian McKay plays Welles and is well cast. Clare Danes is winning - what an articulate face - as the principal girl. And you can almost see director Riichard Linklater positioning the actors around Zac Ephron in such a way as to make it seem he can act.

Me and Orson Welles is diverting. But don't place your expectations too high for this Linklater project.
Posted by Robert E Trudeau at 9:32 AM