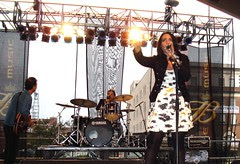 Missoni's Gents will include Billy Masters, Doug Yowell, Mike Visceglia and Daniel Weiss. Daniel has been appearing in the Broadway sensation Hair the past several months. Doug has been touring with the Indie artist Ari Hest. Mike just returned from the Suzanne Vega tour and Billy Masters has also been touring with a variety of notable talent. An incredible group of gifted artists.

Live music and dancing in both lakeside dining rooms. Champagne toast at midnight included. $42.00 per person.