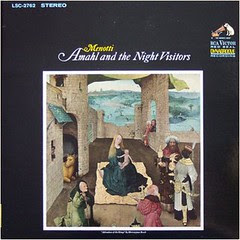 RCA LSC-2762 Menotti Amahl
Originally uploaded by brandonb23
As the opera opens, says the Shreveport Opera web site, Amahl is very excited. He has seen a truly strange and wondrous star outside, one with a long tail the likes of which he has never seen. His Mother, knowing that he likes to make things up, grows angry with him and dismisses his news.

Soon there is a knock at the door. When the Mother opens it, she is astonished to find three kings. They tell her that they are in search of a very special king and show Amahl and his Mother the gifts they bring. The Mother leaves to alert the neighbors to the king's presence, and they return with gifts for the three sovereigns. Later that night, the Mother gives in to temptation and tries to take some of the kings' gold for her and Amahl.