Coming to the RFC: "Disturbing the Universe" with Producer Vanessa Hope on Tues, Dec 22, 7:30 pm 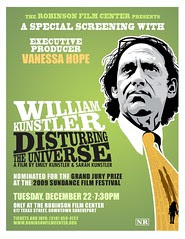 The film tells the story of infamous civil rights lawyer William Kunstler, who defended such iconic figures as Martin Luther King, Jr., Malcolm X, and the inmates who led the uprising at Attica Prison.

The filmmaker will introduce the screening and participate in a post-screening Q&A. Normal admission rates apply.
Posted by Robert E Trudeau at 4:51 AM