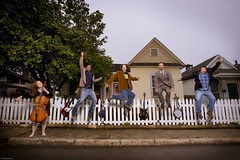 Giant Bear
Originally uploaded by Kellen!
Giant Bear is a rock band from Memphis, TN, coming to Shreveport on Friday, June 22, says kerry.hayes@gmail.com. Earlier this week, Hayes says, the Memphis Flyer said that "Giant Bear might be the next Americana-flavored group from Memphis to break onto the national scene." Check it out here.

"The group is on tour all summer and the June 22 show at Sully's Tavern is their first appearance in Shreveport in quite a while, but they have always been well-received there," adds the lad.
Posted by Robert E Trudeau at 1:22 PM