Europe a model for visually enticing the tourist; signage a key 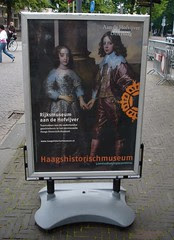 Holland 07
Originally uploaded by trudeau
If you'll think back upon your notable travel experiences I think you'll agree that signage was one of the turning points of whether the trip was sweet or not.

In this current holiday we have found Europe both exemplary and frustrating in signposts.

Yesterday we took the tram from the Van Gogh Museum to Ann Frank House. A map and a fair amount of concentration upon the key and the colored route lines have made the tram experience in Amsterdam mostly a good one. And street names, which do not remain stable along the street's length, are clearly posted.

But after detraining at Westermark Square we found no sign whatever to guide us the final block to Ann Frank House. The site was around the corner and along the canal some half block. Did they simply overlook the final step? Or is it in the nature of the Dutch sensibility to reserve signage for events and advertising?

Regardless, there's plenty for Shreveport to learn by observing other communties. No, Shreveport is not a mighty magnet for travelers. But it is a stopping point and could become a stayover (look at the map and you'll see that we're clearly a regional center) if the city positioned itself to take advantage of the opportunity.

An example of a spot where I've frequently seen Europeans is the Elvis statue in front of the Municipal Auditorium. How do travelers find it? It may be that, like the even more difficult site of Leadbelly's grave (Shiloh Church near Mooringsport) there are internet sites that help the aficionado home in.

If you were a traveler looking for Meadows Museum of Art, a world class jewel, would the signage help you get there? Would you be likely to find someone who would help you find it? If you were walking on Texas St looking for the Southern Museum of Art, again a small but worthy site, you might use up an hour or so in locating it.

Is there a citizen's board that exerts pressure on city planners to look ahead and take a bold stand in regards the community's direction? If so, I volunteer. The fruits of such work may be a while in bearing, but I believe it would be a relatively inexpensive way for Shreveport to make another mark in the competitive world of tourism.
Posted by Robert E Trudeau at 7:20 AM

Michael Parker was just appointed to the DDA. This sounds like a worthy task for him.