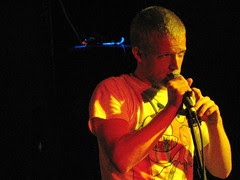 IMG_0458.JPG
Originally uploaded by slight
"It was only after having chosen the name Astronautalis for himself while in high school in Jacksonville, FL, that the rapper (born Andy Bothwell) began to make himself heard in the local circuit, winning battles and competing at the Scribble Jam," says the kit. "Though he was known for his witty freestyling, Astronautalis' musical influences and interests fell outside the hip-hop realm, as well, and he performed on the Warped Tour for three years. It was his rhyming, however, that he pursued while studying theater at college in Dallas, and in 2003 he self-released his debut, You and Yer Good Ideas (which was sold only at his live shows), with production help from friend and fellow musician Ben Cooper (from Radical Face). It wasn't until two years later that the album was picked up by Orlando-based Fighting Records (who signed him after seeing him perform), which reissued it and then in 2006 released his follow-up, Mighty Ocean and Nine Dark Theaters, a record that found Astronautalis moving away from rapping and more toward shoegazer-inspired indie rock." ~ Marisa Brown, All Music Guide

An earful at myspace.com/astronautalis
susan garner
318-780-0605
impactanalysis@gmail.com
Posted by Robert E Trudeau at 4:51 AM