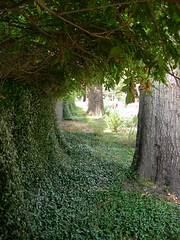 Herewith, an excerpt from Engle's case as presented in the gallery:

V.
During the course of this case, personal relationships, disregarded evidence, ex parte orders, collusion, and bias have determined outcomes. Due process and the truth have been ignored. Witnesses have been dismissed without being allowed to speak.
VI.
After consulting with 21 attorneys, Ms. Engle still cannot gain access to her children.
VII.
Ms. Engle has never committed a crime. She has never been arrested. She has never been investigated by child protective services; in fact, she worked closely with them for two years protecting and advocating for abused and neglected children. Ms. Engle is a teacher, a leader and a long-standing role model for single parents throughout the community.
VIII.
This art exhibit is a visual expression of the trauma suffered by a family that has been manipulated by those with intimate access to “the system.”
IX.
Left in the wake of this disaster are two children, ages 16 and 12, one very confused mother, and an outraged community.
X.
The artists who collaborated on this project are Debbie Buchanan
Engle, S. Alan Dyson and Tony Reans. “Where pride, prejudice and bias are embraced, the truth is not,” according to Alan Dyson, the co-creator of this project and a key witness to the proceedings in this case.


The photo above is from a series taken by Engle and sons Joseph Kammer and Chris Buchanan in 2006.
Posted by Robert E Trudeau at 3:17 PM