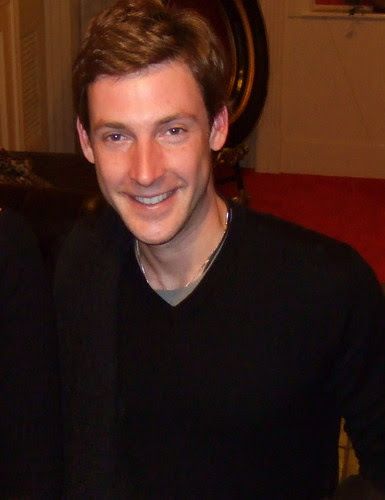 Logan Sledge, Shreveport, a photo by trudeau on Flickr.

Exploring the nuances at play in a 1940's American family was surprisingly satisfying on Fri as River City Repertory opened The Subject was Roses.

A somber drama, Roses has no big secrets - no incest, no abortions, no diabolical abuse. Thus the weight of the show falls to the skill of the director and cast.

Donna McKechnie, veteran stage performer from NYC, became the embodiment of Middle American Mom. Richard Folmer, a dean of acting in this region, matched her as the Classic, Conflicted Dad. The question was whether young actor Logan Sledge might have the chemistry to inject salt and vinegar into their predictable lives.

On Fri night Sledge brought the timing, the empathy and ever-so slight edge, as well as the warmth, to the role of the son. The son who has returned from WWII and who may or may not fulfill his parents' goals.

Director Patric McWilliams has taken Sledge, slim and a subtly sexy guy, into a series of roles in River City Rep (in Doubt, The Rose Tattoo, The Lion in Winter among them) that offer this audience a portrait of a growing and affecting young actor. The Subject was Roses represents a quiet flowering of that partnership.