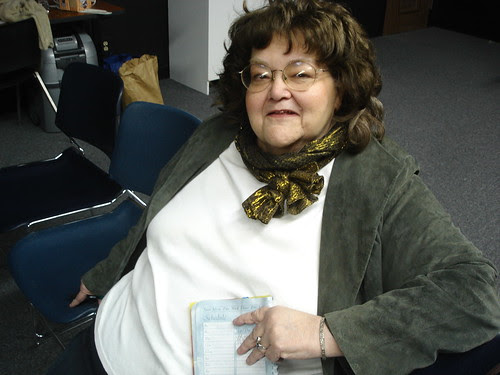 Jerilyn Gilstrap, Shreveport, a photo by trudeau on Flickr.

This weekend, as the 4-character drama Two Rooms was being performed at minicine?, the life and breath of the director/producer of that play, Jerelyn Gilstrap, collapsed.

Gilstrap had suffered bouts of severe health issues for years. Yet she kept herself alive by seeing the necessity of producing another drama to feed the intellectual needs of a small group of literary-minded Shreveporters.

The players completed their performances in Two Rooms.

A veteran of dramatic productions in Washington, DC and NYC, Gilstrap arrived in Shreveport in 2008 with a mission to produce the fiercely intellectual drama Copenhagen.

Between hospitalizations she lost most of the cast and crew and the site of that drama. Gilstrap, a well-read woman of uncommon determination, was not deterred. Eventually her production of Copenhagen took place at the LSUS Black Box Theater.

"Rather than a funeral home memorial service - which we know she would detest - we have decided to have a lunch-time friends and family get-together," wrote her sister, Jenean.

See more on the artful life of Gilstrap at her JCG Productions blog.

Posted by Robert E Trudeau at 9:19 AM

Thank you for such a lovely tribute to Jerelyn - theatre was, indeed, her life - and now, she begins a still another theatrical adventure - brava, Jerelyn, brava!!!