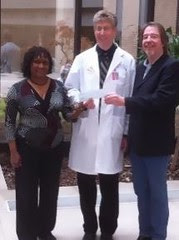 The research grant was given to Dr. Alexander in honor of Buddy Flett
and Carol Fran, two Louisiana musicians who have recently been
affected by severe neurologic illnesses.

The money for the grant comes from the proceeds of the recording
Louisiana Swamp Stomp, which feature both Flett and Fran and several other Louisiana Musicians. The recording which was released in November 2010 has received praise from critics and has been a in the top 5 on several roots music charts.

Producer of the album is Dr. Paul McCarthy, one of the LSU-HSC Shreveport physicians who cared for Flett during his illness.

For more information go to www.brainhelp.org
Posted by Robert E Trudeau at 9:37 AM