Liz Swaine, head of Shreveport's Citizen Bond Study Committee, on the issues facing the city and the ways in which investments can best be made 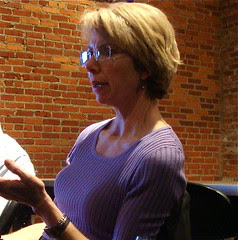 In the following 2 video interviews given to A Better Shreveport, the succinct Swaine, currently head of the Shreveport Downtown Development Authority, recaps the work of the Citizen Bond Study Committee and offers a colorful look at the city's infrastructure woes.

Liz Swaine on the Shreveport Bond issue, coming up for a vote in April.

Liz Swaine and Scott Crain's "Underground and Under Attack," a vivid story of the city's aged and holey water and sewage system.
Posted by Robert E Trudeau at 9:10 PM