Everyman falls for a free-spirited bartender: Prelude to a Kiss @ MLP, Shreveport, Feb 10 - 13 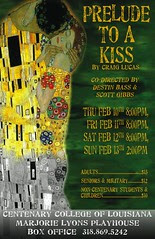 Prelude to a Kiss @ MLP, Shreveport
Originally uploaded by trudeau
Just in time for Valentine’s Day, on February 10th, the Marjorie Lyons Playhouse at Centenary College opens their newest romantic comedy, Prelude To A Kiss.

This fast paced production, says Luke Eddy, follows a whirlwind romance through a young couple’s meeting, wedding and a bizarre twist of fate that tests the newly minted vows of their marriage… and their sanity.

At the center of this grown-up fairy tale is the likable everyman, Peter,
played by Josh Rabalais. Peter shares the details of how he comes to fall in love with a free spirited bartender named Rita, played by Emily Slazer, and how an Old Man, played by Centenary professor Dr. David Bieler, turns the couple’s world inside-out. Along the way we meet Peter’s kooky, suburban in-laws, portrayed by Donnovan Roe and Lauren Morrison; his flamboyant best friend Taylor, played by Barry James Acosta; Marion Paton and Meghan Horan as Rita’s delightfully off-beat wedding guests Uncle Fred and Aunt Dorothy; Sandy Rather as the Minister; Natasha Sebeyran plays the Old Man’s daughter, Leah, and Erika Lunsford is Rita’s co-worker, Tammy.

Co-directed by Centenary College seniors Destin Bass and Scott Gibbs, Prelude To A Kiss is being staged in a black-box configuration to create an intimate environment for the play.