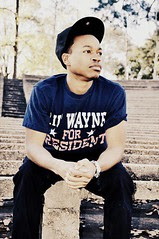 Mikey Tyner, other local indie rappers to perform Saturday at Media Star
Originally uploaded by sbctb
UPDATE: The hip-hop showcase planned for Saturday, February 19 at Media Star Entertainment Hall has been indefinitely postponed by the venue for "legal and remodeling reasons." We're leaving this post up for the purpose of providing exposure for the local artists profiled.

Mikey Tyner, a 20 year-old BPCC student and native of Shreveport, will open for his friend and fellow emcee J-Mitch the Allstar at a hip-hop showcase this Saturday, February 19, 8 p.m. at Media Star Entertainment Hall (1262 Dalzell Street) in Shreveport. The show is all-ages and admission is $8 at the door. Also on the bill is the wonderfully weird New Iberia, LA-based R&B dude SicFlo Beatz.

Tyner began rapping as a senior in high school, when he was also doing a lot of skateboarding and drawing. He says his music "deals with every day problems that people can relate to, and I'm telling it through my own poetic perspective." When asked about the state of hip-hop in Shreveport, he gets excited - he's obviously really into this. "There are a lot of good hip-hop artists coming up in Shreveport that people don't know about yet." He cites J-Mitch and Fly Guy Boo as two examples.

Tyner plans on doing a few new songs on Saturday night, as well as freestyling (improvising rhymes on the spot) and - interestingly - talking to the audience. "I'm gonna explain my songs, why I said what I said."

A few footnotes on the other artists performing Saturday: As is evidenced by the video for "Lookin' Fresh," SicFlo Beatz takes some cues from Portland R&B crooner YACHT. By that, I mean he looks like Ferris Bueller and sounds like T-Pain (I intend that as a compliment, it's a good look). Watch the video, it's fun.

J-Mitch the Allstar's latest song, "Hippie Girl" (which almost certainly is not about a girl), is the most fun I have had listening to a new local musician since the first time I heard Dirtfoot. It's weird and hazy, clever and full of metaphor and wordplay. Listen to it on his MySpace.
Posted by Chris J. at 1:28 PM