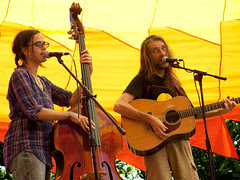 Truckstop Honeymoon
Originally uploaded by Kimm Still
J Bratlie of Dirtfoot writes, "There's a group that we're bringing to town called Truckstop Honeymoon. They will be opening the night for us on Nov 20 at The Warehouse. Mike (originally from Australia) and Katy West are a husband and wife team that met in New Orleans, formed their group and eventually fled from Katrina. They ended up in Lawrence KS where their acoustic based music, Banjo/guitar and upright bass, was well appreciated by the Kansas folk."

"They set up home, but had one problem with KS: no Mardi Gras. So they put on their own parade on Fat Tuesday down the cold streets of Lawrence, KS, and it has now grown into a real event. We've played a few shows with them and they really are great people. One of our favorite songs of theirs is called Magnolia Tree."