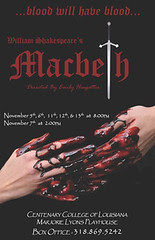 15th century Macbeth: Centenary College
Originally uploaded by trudeau
Marjorie Lyons Playhouse will explore how a once good but ambitious man allows this ambition to lead him into a complete descent into human greed, selfishness and destruction in its performance of Macbeth, which continues Nov 11 - 13.

"In the story of Macbeth, we see two good people who are blinded by ambition and driven by their love and partnership," director Emily Heugatter said. "Throughout the course of the play, we witness the loss of their humanity through their horrific crimes and the devastating aftermath of their actions."

"It's a always challenge to direct a Shakespeare play because they've been around for 400 years and the reason they've survived and are so relevant to us 400 years later is because we deal with very universal primal human emotions," she said. "We're looking at love, greed, rage, envy, lust and ambition. "

Scott Gibbs, who plays Macbeth, says "It is an absolutely overwhelming, but at the same time, very satisfying process," he said.
The character of Macbeth goes through such a wide journey, he said. "I'm starting out as an innocent man with a small ambition of wanting to rise to power and it's kind of the story of what happens when you give those selfish, ambitious thoughts a chance of actually becoming real."

10 for adults; $8 for senior citizens and military; $5 for non-Centenary students and children under 12.