Power of the brush: artist David Holcombe keeps alive issues of the day in paintings at Meadows Museum of Art, Shreveport 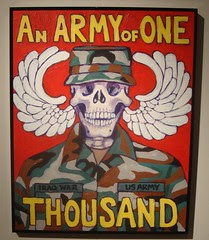 David Holcombe / Meadows Museum
Originally uploaded by trudeau
Harvey Milk & Billy Graham are co-angels in one composition. In another work the students who died in the Virginia Tech shooting are alive. Chairman Mao wears Mousketeer ears and becomes a sinister buffoon in another painting.

These are images from the work of Dr David Holcombe. They are on display upstairs at Meadows Museum of Art, Centenary College.

Holcombe is a painter who says he "uses the power of the brush" to probe the art consumers' social conscience.

Says Meadows director Diane DuFilho, "'Visions and Visionaries' is comprised of portraits that reflect the myriad social interests of the artist. Many of the subjects are elaborate political cartoons that comment on diverse subjects including gun control, abortion and violence among other social and political issues."

Holcombe is a quiet fellow, a physician, life-long painter and collector of art. He has the ability to evoke the issues of the day within canvasses that oscillate upon the wall.

His portraits - aided by good signage - are stimulating in every sense and constitute a highly-recommendable exhibit.
Posted by Robert E Trudeau at 9:32 PM