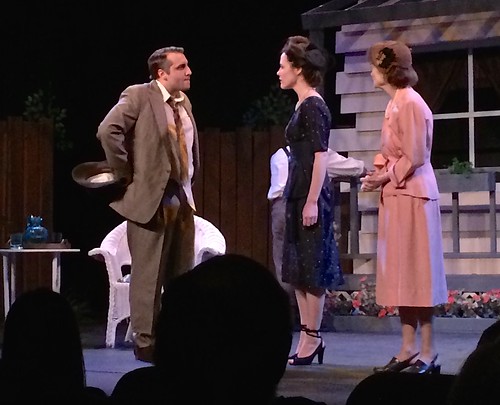 "Audiences have been good for this drama, which is very encouraging," said actress Cara Johnston of Arthur Miller's "All My Sons," a Shreveport Little Theater production.

Says actress-director Patti Reeves, "Be on guard when you see Shreveport Little Theatre's production of Arthur Miller's "All My Sons." The first act may lull you into believing this is a typical community theatre project, but be on guard; the second act will hit you in the solar plexus and leave you breathless. Powerful performances by Shawn Dion, Ginger Darnell Folmer and Cara Johnston. And newcomer Miles Jay Oliver proved he could hold his own with these powerhouses. Other outstanding performances in smaller roles came from Sloan Folmer and Bo Harris. The set is beautiful and OH- to be able to create pictures and moments like director, Richard Folmer It is a rare opportunity to see a classic drama in this town."

Upon consideration, Mrs. Reeves added, "Last night when I was bragging on "All My Sons" I mentioned how rare it was to see drama in this town. I was speaking of community theatre. 80% are comedies and musicals. You do occasionally see drama in community theatre, such as last year's "Diary of Anne Frank" at SLT; "98 Charring Cross Road" at Emmett Hook. Where you Do See drama is college and River City Rep which is about 80% drama and 20% comedy. Saw Shakespeare and Moliere at Centenary recently with some of my former students taking part. My point was that "All My Sons" is a solid production with some outstanding performances and I was enjoying the fact that this was done by Community Theater! By actors who, for the most part, work during the day and have families and yet, still choose, for no remuneration, to sacrifice weeks of late nights to bring the gift of theatre to audiences. I just love that!"

Highly recommended by Shreveport Blog, too.

Thanks to Jamie Killeen at SLT and to Cara Johnston for speaking to Fine Arts Survey students at Caddo Magnet HS about the joys and travails of being an actress.