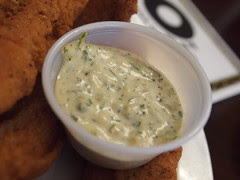 Divinely-inspired tartar sauce at Big O's, Bossier City
Originally uploaded by sbctb
If you're a food lover in Shreveport-Bossier, chances are you've heard mention of Big O's. In my case, I'd heard rave reviews of the fried fish and shrimp and, especially, the homemade tartar sauce created by owner Odis Johnson. When people rave about something as seemingly hard-to-mess-up as tartar sauce, I'm always pessimistic. How special could tartar sauce be?

The answer, as it turns out, is "really, really special." Not just the sauce itself, but the larger-than-life character behind the sauce, Odis "Big O" Johnson, who claims that the recipe for the sauce came to him in a dream.

"It was the night before my wife and I's anniversary," Big O said. "I was planning a big fish fry for the next day, a Sunday. That night, I had a dream. In the dream, I was shopping for all of these ingredients. I bought seven kinds of pepper. I bought Hellmann's Mayonnaise. I remember thinking: do they even carry seven kinds of pepper? I'd never made my own tartar sauce, I'd just bought it at the store. I woke up from that dream, I woke my wife up, and I said: 'I'm making my own tartar sauce today.'" Happy anniversary, honey!

Later that day, at the fish fry, Big O's family went haywire over the sauce. His little brother, who was first to try it, encouraged Big O to sell it commercially, as did several other friends. The rest is history. Delicious, crispy, golden fried history.

Big O's is located at 1129 Villaggio Boulevard in Bossier City. If you're looking for it on a map, it may be best to search for Villaggio's street address, which is 5200 East Texas Street - just off of Highway 80, east of Industrial Drive. Lunch specials are $8.50 and entrees are in the $10-$15 range. A kids menu is available with $5 kids plates. I especially recommend the fried shrimp, which have an unusually light and flaky, almost tempura-style breading.

View a slideshow of images from Big O's.
Ponder an extreme close-up image of the tartar sauce in question.
Visit Villaggio on-line.
Posted by Chris J. at 1:24 PM