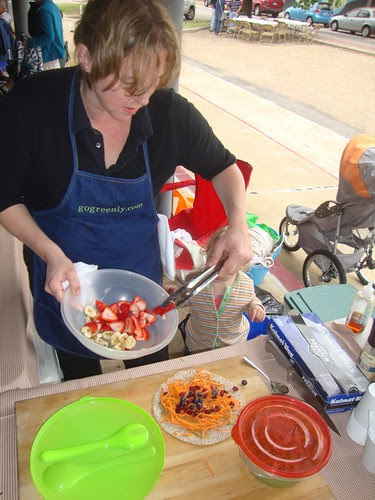 "We are comfortable with the estimate of 2000 people passing through the Texas Avenue / Shreveport Commons area as they attended the Texas Avenue Maker's Fair and Asian Fest on Ap 30," says April Dahm.

Dahm and her Texas Ave Community Assoc (TACA) board initiated the Maker's Fair with a 2-Saturday opening in October. There were 61 vendors in what was advertised as "Not your momma's crafts fair."

The Maker's Fair held in April featured 81 vendors. "And all the food sellers sold out!" noted Dahm.

Dahm said the Fair cost about $1200 to produce, including insurance and police support. The production was aided by Theresa and Greg Juneau, owners of the triangular site at the corner of Common and Tex Ave. The covered parking center provided weather protection for the vendors and enabled the fest to partner with the Asian Festival, since the 2 groups had adjacent sites.

The efforts of numerous volunteers enabled TACA to keep costs low. Vendor's tables were $10 each.

One part of the bargain pained Dahm: "The musicians volunteered their labor and art." Dahm plans to make musicians' pay a priority in the next Maker's Fair, being scheduled for November.

TACA is taking note of complaints so as to hone the event. "There were some disgruntled vendors who had tables in spots they thought were not ideal," admitted Dahm. "There were a few complaints about the volume of some of the musicians, too."

Posted by Robert E Trudeau at 9:21 AM