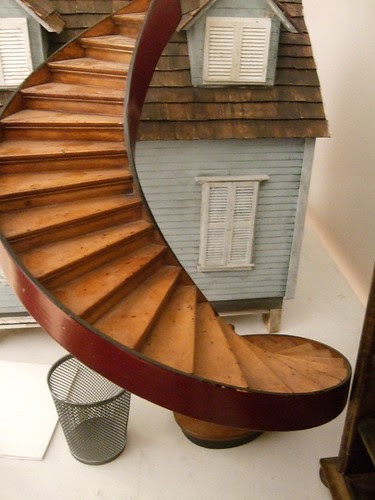 Moonbot Studios, Shreveport , a photo by trudeau on Flickr.

Of the iPad app which makes an adventure of Moonbot Studios' "The Fantastic Adventures of Mr Morris Lessmore," writer Daniel Donahoo, Wired.com, says, "Well, sometimes in the shifting sands of technological evolution it doesn’t take much to shift expectations. The iPad itself only changed things from a child development perspective because it had a bigger screen size. This app, this story, changes things because of the new approach to content. Sure, Disney and Pixar have put their stamps on 3D animation on the iPad, but Moonbot Studios does it with a whimsy and emotion that only appear in Pixar short films these days. And that will mean a lot to children and adult readers alike. The quality of the graphics and interactivity with the images is high. Beautiful audio prompts, like in one scene (these are not pages as we’d traditionally know them; their animation makes them more) all you hear is a knocking, and you eventually realize you need to touch the door to open it and let Morris out. Simple, but effective and a playful discovery that adds to the story of scattered books that can help you fly.

In a nutshell: gorgeous animation, inventive and playful interaction and quality content."

There's more on Lessmore under the Geekdad column by Donahoo.