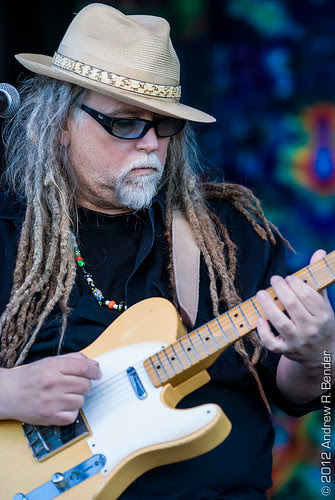 Papa Mali, nee Mal Welbourne, first rose to prominence as founder of the reggae monsters the Killer Bees. Welbourne was raised in Shreveport – with many sojourns in New Orleans – and it was in Shreve Square – in the 80′s – that he and the late Michael E Johnson debuted the Killer Bees. The Bees – which included keyboards and vocals from Stanton Hoffman, then known as “Blondie” – moved to Austin, cut albums, toured widely and left a lovely presence
on youtube and in the world’s vinyl bins.

Today Papa Mali has 3 well-recognized solo albums to his credit. He tours the world with former Grateful Dead drummer Bill Kreutzman in a band they call 7 Walkers.

A popular resident of Austin for years, he has relocated to his spiritual home, New Orleans. But for the forseeable future he's working in Shreveport.

At 700 Texas St, corner of Louisiana Ave, he is the new chef at Tipitina’s Foundation. He says, “My first order of business is giving the Shreveport location of Tip's a major overhaul/facelift. This means that I will be in town much of the next year and possibly beyond. I will continue to tour and perform and I still reside in New Orleans, but I am also getting an apartment here and look forward to reconnecting with old friends and making new ones in the music and arts community.”

The arrival of this internationally-recognized singer-guitarist-writer-producer represents an unexpected bottle of champagne for Shreveport. If anyone in town rivals Brady Blade’s chops and list of friends it would be Welbourne.

Drop by Tip’s, 700 Texas Street, to welcome him and introduce yourself to a long-traveled Shreveporter, Papa Mali.