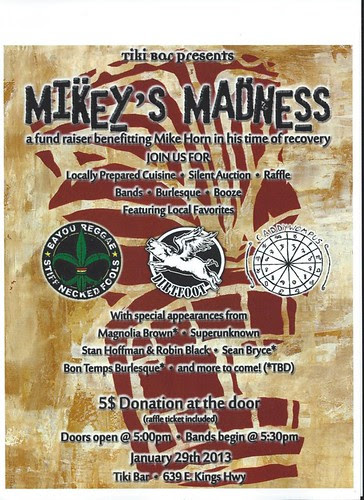 Benefit for Mike Horn, Tiki Bar mixologist, a photo by trudeau on Flickr.

The dimly lit home-away-from-home bar, the Tiki, will come alive from 5 p.m. until 2 a.m. Tues, Jan. 29, to raise donations for one of the best local mixologists, Michael (Mike) Horn.

Mike’s life-changing injury came after a short time out on New Year’s Eve. While walking to his car, he fell into a 6-foot, unmarked city hole—knocking him out instantly and breaking his hip in two places, says Christine Bradley.

Two plates, six screws, 127 stiches and staples were put into his hip after a lengthy surgery at LSU Health Shreveport.

It will take a year for Mike to recover. Not able to put any weight on his legs for six months, he will have to relearn how to walk.

Unable to work during his recovery, his “phamily” at the Tiki bar is dedicating 100 percent of the proceeds to Mike.