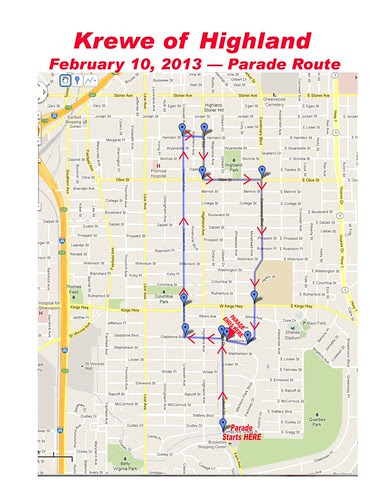 New, extended route for Krewe of Highland Parade on 2.10.13, a photo by trudeau on Flickr.

"The Krewe of Highland 2013 parade will actually start on Gilbert at Gregg Street and head north and will turn left (West) on Gladstone to follow the usual route. Parade will end where Gladstone meets up again at Gilbert," says Emma McCarty.

Staging ground for the floats will be Fern Ave.

"The people that will need to plan are those that normally watch the parade on Gladstone between Creswell and Gilbert," added McCarty. "You will be toward the beginning of the parade now instead of the very end. For everyone else, I would estimate the parade will arrive about 30-45 minutes later than usual."

On a related note: Krewe of Highland Masquerade Bal is Friday, Feb 8, at the Randall T Moore Mansion, Fairfield Ave. Tickets are $40. They can be purchased through Captains, royalty or at Marilynn's Place on Fern Avenue in Shreveport.

Posted by Robert E Trudeau at 9:45 AM