Spamalot @ the Strand Theater, Shreveport: like the Shreveport Symphony Orchestra Holiday Pops and Shreveport Regional Arts Council's Christmas in the Sky, performed to a sold-out house 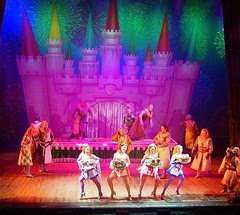 Spamalot @ the Strand Theater, Shreveport
Originally uploaded by trudeau
"The Strand is on a roll," said Lily Herd,"because we sold out Fiddler on the Roof recently and today we sold out with Spamalot." Added Herd, "We had a world of calls for tickets today that we had to turn down. Additionally, every ticket that was turned in by a patron who could not attend was then sold."

Spamalot was tight. The 2-hour show was marked by uptown lighting, well-honed voices and impeccable ensemble dances. Spamalot pulled out every trick in the Broadway book, including T & A, audience participation and confetti in the air.

The Shreveport Symphony Orchestra also sold out its Holiday Pops concert at Riverview Theater on the weekend. As did Shreveport Regional Arts Council sell out its vast benefit, Christmas in the Sky, last weekend.

Meanwhile, what might be called the alternative audience has never been larger for events such as minicine's Xmas Under da Ground.

Let it be noted, too, that most of these events have taken place at downtown venues, in the evening.

Not a bad way for Shreveport to close out a difficult year.
Posted by Robert E Trudeau at 9:28 PM