Activist and artist Robin Rothrock, founder of Shreveport's Hope Clinic, is dead of cancer at age 60 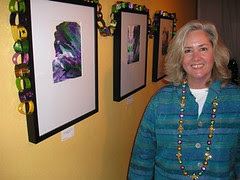 Robin Rothrock's Backroom Gallery, Shreveport
Originally uploaded by trudeau
During her 25 years in Shreveport very few people knew where the late Robin Rothrock lived. Because she was manager of Hope Medical Group for Women, an abortion clinic, she was constantly subject to harassment. Though her nature was to be outgoing and generous, she had to guard her privacy.

Rothrock was a leader in the perennial struggle to keep abortion available in the region. According to a generously honorary article in the Times, her clinic was "at one time was the only abortion provider in a 400-mile area between Dallas and Jackson, Miss."

Opening the clinic in 1980, Rothrock became a steady visitor to Baton Rouge for lobbying. With a background in sociology from her home state of Florida, she was an articulate and passionate voice for women's rights.

Rothrock, a woman quick to smile and one able to spar with geniality, was well-traveled among the leading businessmen, politicians and physicians of Shreveport and the state of Louisiana. She enjoyed debate and challenges and felt that full extensions of women's rights, even in ill-educated Louisiana, was inevitable.

"She has stuck with the effort to provide abortion care through thick and thin: clinic assaults, fire bombs, protesters, and state regulations aimed at reducing access to abortion care," wrote Pearl Serbanic in nominating Rothrock for a Woman's Health Hero award.

In recent years she became a successful artist, displaying and selling visual art at one time from her Backroom Gallery in the Arodasi Center on Market St. Her art was included in shows at Artspace Shreveport and Bistineau Gallery and displayed at Prima Tazza and Bella Fresca.

She founded Highway Grrls Gallery & Studio near her home in Melbourne, Florida.

"Rothrock was president of the League of Women Voters of Louisiana in the 1980s," wrote the Times."She remained politically active despite a four-year battle against breast cancer."

See a descriptive article on Shreveport and Rothrock in Mother Jones magazine.
Posted by Robert E Trudeau at 8:41 AM