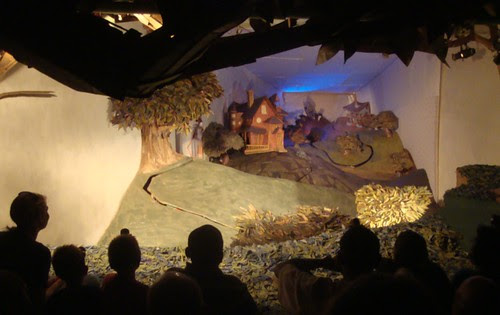 Wearing long jeans and a t-shirt to the 2-hour puppet show called "The Fantastic Mr Fox" was smarter than I knew.

For on Saturday night "Mr Fox" was an adventure in which the audience's climbing, scrunching, hiding, and sliding was part of the entertainment.

"Fox" felt like a ride on a Potteresque night train in which each lurching train car
reveals an inventive drama that mixes distress with disportment.

Too, it was a bit like a Bill Joyce book come to life - each room featuring surreal perspective and droll detail such as warped cabinets and lamps. And a stream of sly jokes (a special edition of Fox News was witty) kept the adults alert.

While I fully recommend the experience, I am not saying that it is a pristine production. "Fox" takes place underground in a rough-hewn world constructed of cardboard and wood. Some of it is properly and humorously painted, and some of it is not.

"Fox" seemed like an off-off Broadway show because the mufti-clad puppeteers were not hidden - they were omnipresent and kept the puppet figures in constant motion.

The puppets - "Fantastic," his son and his wife - were bursting with body language. If the actual puppet figures were larger - they are realistically skinny - I think the show would have been even more effective.

The soundtrack was one of my favorite elements. Beatlesque tunes written and recorded by the creators of "Fox,", SFX and symphonic flourishes were expertly added to each tableau.

And the voice of New Orleans musician Johnny Vidacovich as "Fantastic," the charming n'eer-do-well, gave the audience a soulful and vivid hero.


See tickets ($20 ea) and schedule of performances, of which several are sold out, at Artspaceshreveport.org.

- Those who want to see the show but don't feel the gymnastic parts will work for them can take an alternative walking path between scenes.
- In-betweeners can grab knee pads and enjoy a modified trek. Rough-and-tumble types may be OK wearing shorts but we steadfastly recommend long jeans.