Movie review: Jack White vs Page and the Edge in It Might Get Loud at RFC this week, through Thurs 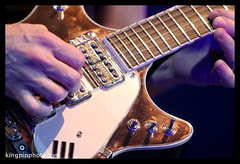 Jack White of the Raconteurs
Originally uploaded by kingpinphoto
Jack White's beat-up, cheap and old guitars are almost slammed against the glowing maple and mahogany Gibsons fingered by Jimmy Page and the Edge in the documentary It Might Get Loud. The movie makes it clear that it's the player, not the guitar.

White quickly claims the upper ground. He was from a poorer family than the other guys and he has been successful while playing utterly crappy guitars. He also launched his career by performing and recording with Meg White, a woman who could barely sing or play drums.

The Son House shout-out would seem to be an opening for Page, who built most of Led Zeppelin's catalog by reworking Delta bluesmen's tunes. But, nada. Maybe he's still in denial about his adaptations. Back in the day, Zeppelin had to be sued for stealing material from Howlin' Wolf.

We learn about Page's background in skiffle and pop, but the historic thread dies. Sadly, there's another spurious moment: Page implies that the 12-string/6-string double-neck he played in concerts on Stairway to Heaven was a guitar created for his needs on that 1971 tune. Argh. The EDS 1275 used by Page had been introduced by Gibson in 1962.

The stolid Edge is the mystery. How was it that he and Bono squitched their niche in pop music? He is smart enough to keep his guitar parts bone-simple. They are entertaining mainly through his canny use of electronic effects, he seems to say.

The 90-minute documentary is entertaining because we get some of the background on 3 of the most successful men in the history of guitar. Millionaires all three.

Do expect to be mesmerized by the savvy crap spewed by White, who is as interested in conning us as he is in screaming the blues.

Wish there had been less ruminating by Edge on the dock and by Page at a manor house and more speaking through loud guitar, bass and drums.

A great movie for practically any picker, or anyone interested in what a picker is.

More a character study than a tech or talent review, the really telling moments were the unguarded ones. Jack White smiling, eventually, at Jimmie Page's seminal "Whole Lotta Love" riff. The Edge admitting sheepishly that a lot of his playing is more effects than notes. And Jimmie Page reflecting over the course of a career, clearly wishing he weren't at the back end of it.

There wasn't much playing, per se, and what little happened as a group was almost painful to watch. Perhaps it was tension created by careful editing, or merely the tension of three real guitar heros trying to figure out where they stand in an ad hoc group, but there was a near sadness in watching each player show the others some signature licks.

And you couldn't help but watch the ensemble hoping, praying, beseeching any Higher Power to simply let them all plug in, dime those amps, and really play.

I didn't catch the reference to Page indicating he had the double neck SG made, and it was a bit tiring to watch the Edge endlessly fiddling with one electronic gadget after another, much as it was trying to sustain belief in White's self-avowed "I'm a blues purist" schtick.

But a lot of schtick sloughed off when these three egos had to deal with working out a song they all could do on acoustics. The Band's "The Weight" somehow was selected, and one of the most gratifying moments of the movie is when all three realize they'd been playing the chord progression wrong. From Page's "Shit!" to another begruding smile from White, to the Edge's shrugging and "let's carry on" approach, it brought three very large musician down to a very human scale.

So when the credits rolled over the back end of the slightly improvised "The Weight", and as the camera craned back from the lighted area where they sat and played, and revealed a score of people in the dark, silently watching three guys trying to make a little music, there was a reverence and a dignity that transcended any ordinary understanding of what rock and roll was, is and will be.

Amen was the only appropriate response...

Gosh, what a terrific review. I admire your insight and your way of expressing it.

I wish I could agree with you that "The Weight" was an effective closer. The vocals were nice but we had 3 guys playing the chords. Poor form by anyone's accounting.

A Chuck Berry tune would have brought out each picker's strengths. They would have barbecued "Roll Over, Beethoven."

I hear ya. Hell, even "Louie, Louie!" The rendition of "The Weight" was lame-ish, but what I really dug was learning that all these gods not only make the same mistakes I do, they have the same idiot-grin reactions.

I did have different reactions on a personal playing level to all three.

I kept wanting to take all the effects racks and boxes away from Dave Evans, give him a Tele and a Twin and say, "Get it!"

With White, I kept thinking how cool that Silvertone amp looked, and whether he can play anything outside a minor pentatonic scale.

With Jimmie, well, I just felt sad for him. He seemed more eager than the other two (although I doubt that was really the case)to talk about what for him is now history.

Wow; another thoughtful, articulate response. Thanks to the both of you for gracing the blog with your views.

I thought Jack White scored with his keyboard pounding. Last night I read that the Edge - Dave Evans - also plays keys. Was this another missed opportunity?