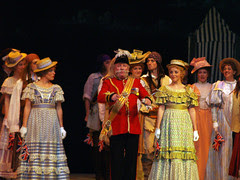 Pirates of Penzance!
Originally uploaded by Amy Eileen.
The Gilbert & Sullivan Society of North Louisiana will present the Carl Rosa Opera company’s performance of The Pirates of Penzance on Mon, Ap 16. The British company includes West End star Rosemary Ashe (the original Carlotta in The Phantom of the Opera) in the role of Ruth.

The evening reproduces the ambience of a night in Victorian London’s Savoy Theatre, says John Goddard.

A pre-performance gala on the mezzanine of the Strand will be held for supporters of G&S at 6 pm. Tickets are $100.

"Hi guys," writes Susan Kirton. "I wanted to let you know that the last production before The Strand theater closes is 'Pirates of Penzance,' by the award-winning London touring company. Patrick and I are in a 'curtain opener' – 'Rosencrantz and Guildenstern' – a 30 minute comedy that does a hilarious send-up of Shakespeare. There will be food and drinks and the evening will be really elegant, so I hope that you’ll be able to attend – it should be a really fun night of theater!

Hope to see you there!"
Susie Kirton

Do you mean closes for the season or closes for good? (Orphan someone who has lost their parents or Often frequently?)