Fetterman, Usher, Montana and Parsons at minicine? in the TEDxRedRiver presentations Tues, May 22, 6 to 8 pm 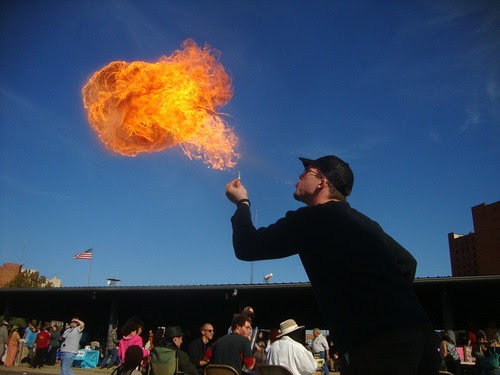 The TEDxRedRiver May 22 event at minicine? includes, says Cole Brand:

Andrew Parsons is a culinary artist who feels most fulfilled in collaboration with his clients. As a chef, Andrew utilizes fresh, wholesome, as-local-as-possible ingredients to create gastronomic experiences. Parsons began his culinary career at Jay Rigby's in Bradenton, FL, went on to cater farm parties in Denver, NC and he now owns Lagniappe Foods in Shreveport. His culinary experience comes full circle in the construction of highly-functional, memorable and exciting kitchens.

Pete Fetterman is a fire-breathing performance artist and musician. Fetterman has performed at the McNeil Street Pumping Station New Music Festival in 2009 and 2011. He has been involved in multiple collaborative music projects including Sound Medicine Research, Drum Militia and Mosquitosophagus. Fetterman often creates with found objects or handmade instruments in the exploration of sound. He will perform an original composition.

Kathryn Usher creates art work influenced by popular culture, voodoo and politics. Her works incorporate digital media, fiber/textile, recycled/found objects and traditional materials. In 2010, she was recognized by UK art scholar Dr. Melissa Westbrook as one of the artists in the Neo-Outsider art movement. Usher is in the process of turning her frontyard into a folk art environment.

Dacoda Montana is a musician and artist based in Shreveport, LA. His performance-based, down-tuned, avant-distortion group John Calvin is a experiential multi-media methodology investigating the transformative nature of analog technologies. He has toured nationally performing and exhibiting his experimental films and melancholic "dirge-concrete" compositions. He believes in the importance of place.

Posted by Robert E Trudeau at 4:59 AM

Thanks for blogging about the May TEDxRedRiver talk. I'm honored and excited to be a part of it.