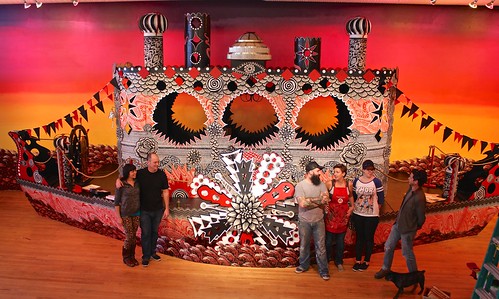 Hairy mythology, roguish sculpture and reticulated line is part of what Brooklyn/Houston lupinoptera Dennis McNett is about.

He is a coast-to-coast monster of American art, though the Whitney is not likely to be calling him this month. A prodigious as well as fluent artist, McNett is not aiming for orthodox art world acceptance. His starting point is skateboards, punk rock and Gaelic knotmen; his goal lies in the realm of Yaqui sorcery.

Arriving in Shreveport via the invitation of Pam Atchison and the SRAC team, McNett has decided to amplify the mythology of the Red River valley in his Artspace exhibit. The project has produced a 32' psychedelic steamship - it oscillates like a caffeinated hyena - as well as intense depictions of people such as Leadbelly and Johnny Cash.

McNett is a master of woodcuts and linoleum cuts as well as drawing and three dimensionalism. Thus an appreciation of the textures McNett produces reads like a murder mystery.

Is he an anti-artist? A working class hero? McNett's credo is "Just want to build stuff and have fun making it. And have people geek out over it." 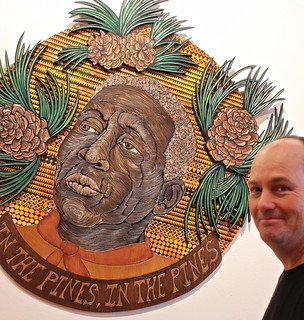