Gris Gris in Shreveport: Dr John and the Nite Trippers play the Strand Theater on Thurs, May 14, 8 pm 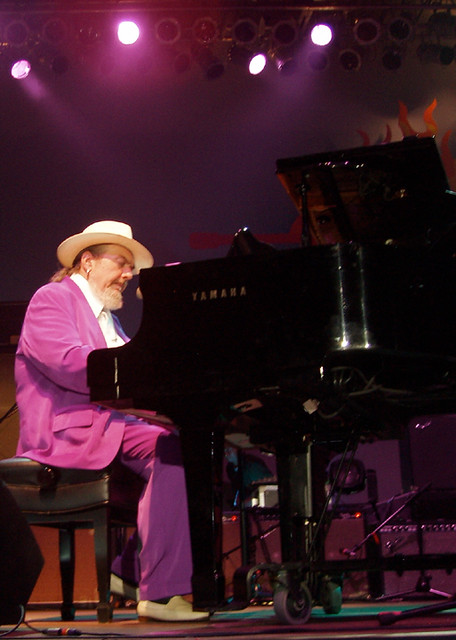 Traditional Crescent City rhymes like this one have been bread and butter for Dr John, an epic storyteller via gravelly voice and smooth piano.

Dr John and his Nite Trippers return to the Strand on Thurs, May 14, 8 pm.

Hanging with the musicians of New Orleans - since he was a teen - was not wasted on Mac. Somehow he knew to shank and shuck and soak up the funk. Professor Longhair, James Booker, Cosimo Matassa: the good doctor smoked their eyelids and punched their cigarettes.

His albums, "Gumbo," "Dr. John Plays Mac Rebennack," "Bluesiana Triangle," "In a Sentimental Mood," "Gris Gris" and "Babylon" have touched me and been steady companions across years.

You probably knew that the festival called Bonnaroo was named for his 1974 album, "Desitively Bonnaroo."

Opening quote from Under A Hoodoo Moon; the Life of Dr John the Night Tripper (St Martins' Press, 1994). Photo above of Dr John at Shreveport's Municipal Auditorium by Lilly Daigle.
Posted by Robert E Trudeau at 7:39 PM