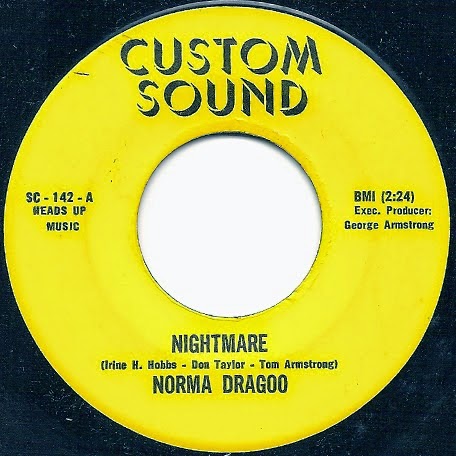 Announcing a new post on the Shreveport Songs blog.

“In the dead of the night…” Norma Dragoo recorded the song “Nightmare” sometime in the early 1970s. Detective work performed by the Shreveport Songs blog reveals a few clues, but we welcome your input.

On December 19, 1999, the Shreveport Times newspaper published an obituary for Norma Jean Taylor Dragoo (1942-1999). She was a native and resident of Shreveport; her occupation – self-employed hair stylist. It appears this is the same Norma Dragoo who recorded “Nightmare.”

For the rest of the clues plus audio from "Nightmare" visit: http://shreveportsongs.blogspot.com/2014/10/norma-dragoo-nightmare-custom-sound.html
Posted by Chris at 2:39 PM