Fleetwood Mac to Nirvana: a trip across rock history with Dave Grohl in the movie "Sound City;" at the RFC through Thurs 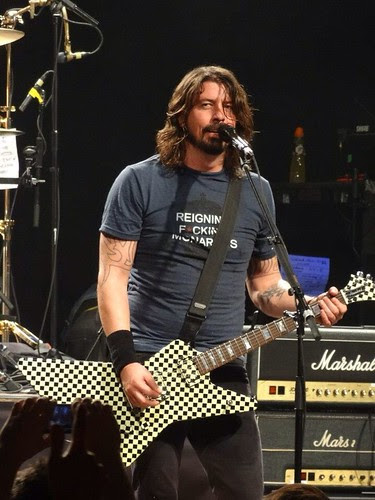 Sound City, a new documentary by Dave Grohl, is highly recommended for vivid rock history. From Neil Young and Tom Petty to Paul McCartney, the movie is a parade of top dog performers.

That being said, it is long at 108 mins. And it's a bit repetitive; almost everyone has to testify about the soulfulness of analog recording.

It is a fan film. Mostly it's a story about a non-descript Van Nuys, CA, studio where a ton of hit records were tracked.

Important milestones are covered - from the meeting of Buckingham-Nicks with Mick Fleetwood to the Kurt Cobain sessions for Nevermind.

The movie's finale is in Grohl's studio, where he has saved the Neve mixing board and Ampex tape machine from Sound City.

Btw, Shreveport also had a Sound City studio. It was located on Line Ave and engineer George Clinton also used 2" tape to cut some hot R n B sides. Alas, there were no hits.

Grohl brings in Rick Springfield, Trent Reznor and even Paul McCartney to celebrate the old gear. Those sessions are on a rockin' album called "Sound City: Real to Reel."

If you're a fan of guitars, drums and recording, do see the Grohl documentary. It's at Robinson Film Center - through Thurs.

Posted by Robert E Trudeau at 8:52 AM