The late Kitty Wells, the Hayride and Elvis in Tillman Franksautobiography, "I Was There When It Happened" 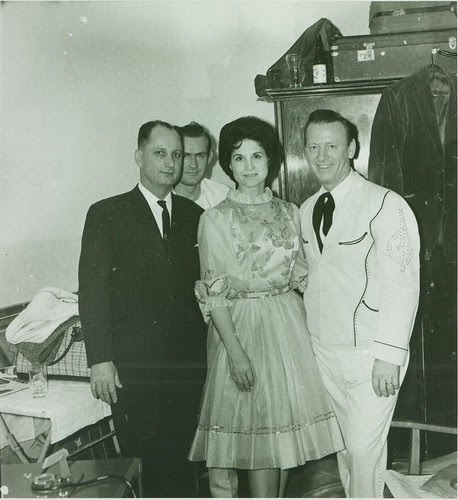 Kitty Wells has died at the age of 92, writes Bruce Flett.

She was the first woman country music star and spent some of her most productive and formative years in Shreveport.

Kitty was married to Johnny Wright, of Jimmy and Johnny , the country duo who were regulars at Shreveport's Louisiana Hayride as far back as 1948.

Louisiana legend J D Miller of Crowley wrote a song that was an "answer" to Hank Thompson's hit "Wild Side of Life." Kitty Wells recorded that song by Miller, which was, "It Wasn't God Who Made Honky Tonk Angels." It went to #1 in 1952 - the first #1 hit in Country music by a woman.

In 1954, Jimmy and Johnny got an offer for $500 (big money back then) to perform in Colorado. They were booked at the Hayride that same night, so their manager, Tillman Franks, tried to line up a suitable replacement.

Tillman was in Memphis and had heard about this teenager that was a local sensation. Thus it was that Elvis Presley's first performance in Shreveport - October 16, 1954 - was as a replacement for Jimmy and Johnny.

Editor's note: If you like regional music history, I recommend joining the witty email blast from musician-historian Bruce Flett called Port Cities Museletter. Reach him at blucebird@gmail.com.
Posted by Robert E Trudeau at 8:10 AM

Correction to story above: