After five decades of Connell life on the shore of Lake Bistineau, Louisiana, the Clyde Connell house is vacant 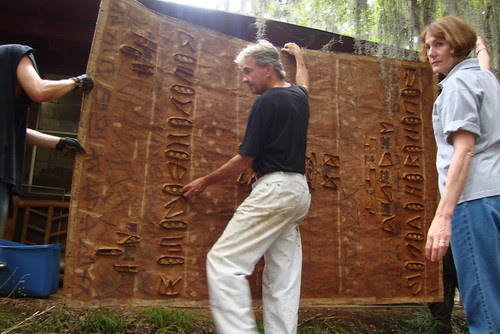 Bryan Connell, son of artist Clyde Connell and long-time household keeper for Clyde, has moved. He will reside near his daughter, Kay Colvin, outside Edmond, Okla. His relocation, in July, 2012, brings to an end the Connell family life in the cottage on the edge of Lake Bistineau after five decades. Clyde and husband TD Connell moved there in 1959.

Several major pieces of Clyde's art that have been part of the furnishings of her house have been donated to the Louisiana State Exhibit Museum (LSEM), Shreveport.

In the photo above are LSEM curator Nita Cole and Clyde's nephew, Dr. Pat Sewell, a neighbor on Lake Bistineau and also an artist. Also on hand for the art transit was LSEM director Wayne Waddell.

The piece being moved is the large and early "Swamp Song." This version features raised-wall enclosures fashioned from brown paper and glue. Some of the corral-like enclosures contain segments of cork from wine bottles. The surface of the piece is covered with automatic writing script in black paint. Additional pieces of light-colored torn paper punctuate the surface.

Connell created a large number of pieces on brown paper as she transitioned from her versions of the image of the lake ("Lake Verticals," her wavy-line logo, etc) to her hieroglyphic depictions of the sounds that surrounded the lake.

This "Swamp Song" was signed "Clyde Connell." Evidently she had not yet developed her cartouche-enclosed "CC" signature.

Waddell has been successful in reviving funding and activity at LSEM, the history and art center on Greenwood Rd, the Fairgrounds, Shreveport. It is a Smithsonian Institution Affiliate and on the National Register of Historic Places. Devotees of Connell will certainly appreciate LSEM as a new site for the preservation of the Connell legacy.

Please see images of moving day at www.flickr.com/photos/robert_trudeau. Also, a source for background and news relating to the honored Louisiana artist is Clydeconnell.blogspot.com.