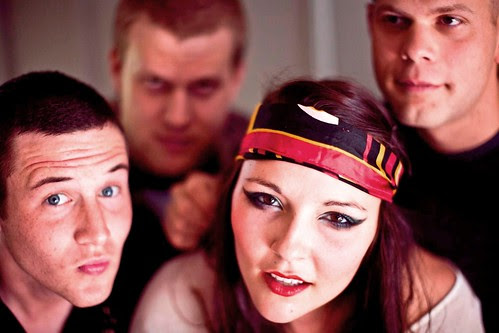 Super Water Sympathy is a group that unites The Terms' brothers, Billy and Clyde Hargrove, with drummer Ryan Robinson, veteran of many bands since his high school days, with Ansley Hughes, once best known for her voice and dancing in stage productions for Academy of Children's Theater (Thoroughly Modern Millie) and Caddo Magnet Drama Dept (Chicago).

Interestingly, they all grew up in Shreveport.

They've got a new album (not quite ready), have performed from Austin to New Orleans and many dates between, and have a super flowing video to the poppy tune "You Us Hey."

The entertainment value in SWS begins with belting singer Hughes, possessed of a voice and sense of drama way beyond the commonplace in rock. Drummer Robinson is adept, quietly aware of how to make you move. Guitarist Clyde Hargrove has a murderous wit as well as slashing Strat hand. The new keyboard player is Jason Mills.

They're at the Warehouse with Colour Revolt w/ Dear Ghost and Sawyer Family on Fri, Ap 8.