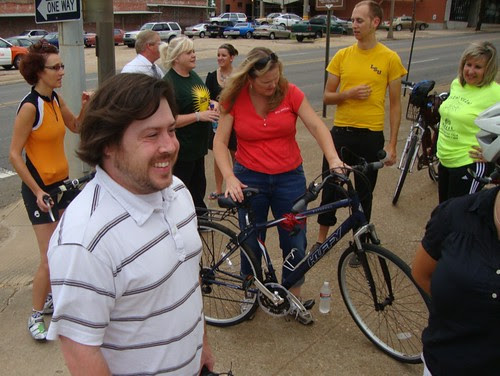 A Better Shreveport Candidates Bike Ride, a photo by trudeau on Flickr.

"Welcome to My World is a coming of age comedy about a gay college student, his troubled kid brother, and his stoner best friend,"says Jeremy Jones, Shreveport videographer and fimmaker.

"The film follows the trio and their web of friends and frenemies as they prepare for a much-hyped Halloween party. A sort of John Waters meets John Hughes style film, its underlying message is that all people are connected on a spiritual level."

"To get the movie to the masses," adds Jones, "my plan is to take a new approach to self-distribution. Instead of posting the film to the Internet, I want folks to enjoy it projected on a silver screen. To accomplish this, I will take the film on the road similar to the way rock bands tour - going from town to town and creating buzz ahead of each stop via social media such as Twitter and Facebook."

The reason for the $20K in the kickstarter project? "Instead of spending huge amounts of money to rent theatres in each city, I will purchase my own digital projector, portable screen, surround sound equipment, popcorn machine, folding chairs, and a trailer to carry it all. With the assistance of fans and friends, I'll book free venues along the way - bars, restaurants, homes, libraries, colleges, etc."